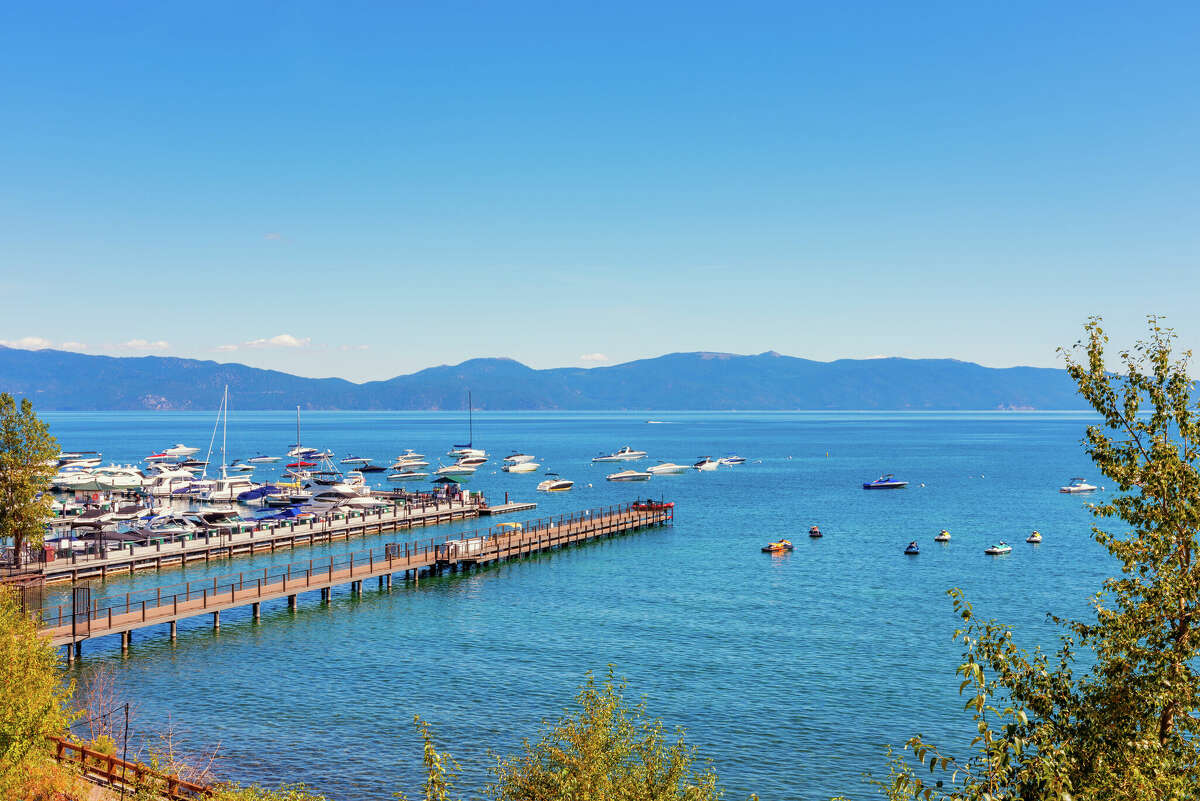 Change is coming to a small Lake Tahoe town, and this time, residents are cautiously optimistic.

Located on the lake’s northwestern shore, Tahoe City is a one-stoplight kind of town — and proud of it. It has a small-town feel, with locally owned businesses, a tiny elementary school on the hill and a main street that looks the same as it did 20 years ago, even as the world beyond its limits has changed.

It’s so sleepy, installing sidewalks was the biggest thing to happen to this town since the 1970s, and that only happened in 1999. “Tahoe City finally getting downtown sidewalks,” reads an Associated Press headline. The town had been trying to build sidewalks since 1974.

So when change does come to Tahoe City, it usually arrives slowly, often with a lot of controversy. That’s why there’s a big gaping hole, full of sawdust, bordered by a chain link fence at the west end of town, where lawsuits have stymied plans to build a new hotel. It’s why rumors are flying about what’s going to happen to the Boatworks Mall, a landmark on the east side of town that houses locally owned shops and restaurants. (According to Placer County records, an environmental impact statement is being prepared for a proposed hotel with 80 to 85 units and 31 condominiums on the Boatworks Mall’s 3.8 lakefront acres.)

It’s also why Tahoe City is losing its middle class and its workforce, the people who want to stay here, but can’t afford the sky-high cost of housing on the local wages of a tourist-driven economy. The median sale price of a home in Tahoe City in June was $1.39 million, according to Redfin.

And Tahoe City is aging. Not just the buildings, but the people, too.

“Change is happening as we age out,” said Dave Wilderotter, who owns Tahoe Dave’s Skis & Boards, which has several locations in Tahoe City, Kings Beach and Truckee. Wilderotter moved to Lake Tahoe in the 1970s,  part of a generation of locals that established most of the landmark businesses in Tahoe City. Now, that generation is approaching retirement.

“Who fills in the gap behind us is a big-time question,” Wilderotter said.

Last week, another developer made a bid on Tahoe City’s future. The news made some locals exhale a sigh of cautious optimism that positive changes could be on the horizon for this town. For one, the developer is younger, with a track record of building community-driven places in mountain towns.

When I called the developer, he told me that Tahoe City may be aging, but it’s still got a great view of the lake. It’s still a hub for outdoor recreation and culture. It’s still a place where people want to be.

In other words, Tahoe City still has some potential.

I grew up in Tahoe City; it’s impossible for me to report on my hometown without disclosing my personal connection to these places. I started reporting 15 years ago at a since-shuttered newspaper office in the heart of town, and my family still has a lot of roots here.

Since it’s a small town, word travels fast here. I’d been hearing for the past few months about the impending closure of Blue Agave, a 27-year-old Mexican restaurant, and America’s Best Value Inn, a locally owned franchise. My dad has worked next door to those properties for almost 40 years. The question was always about what would come next and fill in the gaping holes left behind by two longtime, locally owned businesses.

That was answered last week, when Evo, a self-described “outdoor retailer and experiences company,” announced its acquisition of the Blue Agave and America’s Best Value Inn properties on July 11. Bryce Phillips, founder and CEO of Evo (stylized in all lowercase letters), said he wants to provide “a gathering place for the community, anchored in our shared love for the outdoors.”

Evo’s track record bolsters Phillips’ words. The company has a footprint that spans the Western United States and also touches mountain communities in both British Columbia and Japan. The company’s development arm gravitates toward older, historic buildings in aging neighborhoods. Its investment infuses these places with new energy. In Salt Lake City, Evo transformed 100,000 square feet of old warehouse space into a “campus” with a hotel, retail, a bouldering gym and a skate park. Phillips wants to bring a similar-feeling campus to Tahoe City.

I’ve spent my entire career reporting on developers’ dreams and promises for Lake Tahoe, and in the past 15 years, I really haven’t seen many of those promises kept. Lawsuits, regulation, money — there’s a lot of reasons why development plans change and fade over time in North Lake Tahoe. But when I heard the news about Evo, I felt a jolt of excitement and optimism.

I’m not the only one who feels that way. Brendan Madigan owns Alpenglow Sports, a 43-year-old mountain shop that sells gear and apparel. Soon, Alpenglow’s new neighbors will be Evo, another shop that sells gear and apparel for the outdoors. Yet Madigan isn’t concerned about the competition. He sees Evo as a force for good that will infuse much-needed change to Tahoe City. He describes it as a rising tide that benefits all ships.

“We need a lot more compelling reasons for the middle class to stay in Tahoe City and the North Shore at large, but we also need compelling reasons for people to visit here,” Madigan said. “There’s this quaint Tahoe, but that only lasts so long. Because this town hasn’t had any love since the [1960] Olympics, if we’re really honest. No new buildings. No real new anchors since the ’70s.”

When I sat down with Madigan on a sunny porch behind Alpenglow, we faced the backsides of Blue Agave and America’s Best Value Inn. Blue Agave is in a building that was built in the 1870s, as the historic Tahoe City Inn. The inn was the focal point for the entire town at the turn of the 20th century, according to a book on Tahoe City’s history that I recently found. Its yellow log siding and first-story shaded porch are all unchanged since the 1930s; it was rebuilt after a fire in 1934. Totem poles on each side of the front door are relics from an MGM movie filmed in Tahoe, called “Rose Marie.”

This building is the epitome of what Madigan describes as “quaint Tahoe.”

The same can’t be said for its next door neighbor. The America’s Best Value Inn is an L-shaped, two-story structure that sits on the edge of a large asphalt parking lot. Its blue paint is chipped. The swimming pool has long been empty, and when I drove by last week, I noticed cracks in the siding. Rooms are cheap here, but most of the time, that parking lot is empty.

“I’m psyched on what could be,” Madigan told me. “I’ve told people I probably won’t like 100% of what they do, but —” he waved his arm to the parking lot, the aged hotel behind, the old Tahoe City Inn — “I mean, we can only go up.”

When I called Phillips last week, he told me that moving into Tahoe City is the end of a common thread that Evo’s been pulling for a long time.

“What does it mean to engage in community? It’s partnership. It’s bringing people in, celebrating the things we love,” Phillips told me.

Phillips grew up in a logging town in Oregon, according to a profile in the now-defunct Powder Magazine. (Another personal disclosure: I was an editor at Powder Magazine when this profile was published.) He started selling ski gear out of his living space in college, then on eBay, then on a newly created evo.com. In 2015, Powder reported that Evo had nearly 200 employees and grossed nearly $50 million. Since then, Evo has continued to rise.

Phillips told me about a recent project he’d completed in Snoqualmie Pass, a ski destination about an hour east of Seattle. They’d renovated an old firehouse that’s remarkably similar to the Blue Agave building: “The shape of it, the siding,” Phillips said. “We just finished it. We opened a great co-working, creative work space, a market and cafe that was a badly needed amenity for the community.”

That kind of center for the community is also what Phillips wants to create here in Tahoe City.

“There’s a hunger and appreciation for the culture and clearly, the recreation. [Tahoe City] used to be the real center of it all in North Lake,” Phillips told me. “We love those opportunities. How can we work with the community and folks on the ground to be a positive catalyst?”

To cinch the deal, Evo had to make three acquisitions: the Blue Agave building, America’s Best Value Inn and the land underneath the inn. That land was owned by the Bechdolt family, which has owned a huge swath of properties in Tahoe City for decades. That all three of those properties came up at the same time was a rare alignment of the stars, Phillips said. At the same time, as people age and retire, these kinds of deals in Tahoe City are more available now than they’ve ever been before.

In 18 to 24 months, after both buildings are renovated, Phillips said he hopes to open a new Evo flagship store on the first floor of the old Blue Agave building, keeping the office space upstairs. America’s Best Value Inn will become the second ever Evo hotel, following up a similar hotel in Salt Lake City. Evo has also committed to building workforce housing, though how much and what it looks like are still unknowns at this point.

Evo is also talking to a group of people who are trying to build a skate park in memory of a local high school student who died last winter in a ski accident. If all goes according to plan, Phillips said the Scotty Lapp Memorial Skatepark may have a temporary home in the asphalt parking lot behind Blue Agave soon.

A second phase of development will come eventually to do something permanent and revamp the asphalt parking lot, Phillips said, but he wasn’t ready to say what that would look like yet. “Phase Two is TBD,” Phillips said. “We have a lot to learn.”

Tahoe City has the lakefront location that’s ripe for investment and revitalization for a new generation of business owners. But new development isn’t going to solve some of the biggest issues that have long made this town a challenging place to weather change. The environmental hurdles to developing are twofold, requiring approvals from both the Tahoe Regional Planning Agency and the county. And the housing crisis continues to battle weary business owners whose employees are moving out of town. Those issues aren’t going away any time soon.

“No one has sugar-coated — they’ve been very, very candid about these topics,” Phillips said.“We’re going in with eyes wide open, and [those issues] do exist at other locations. We hope to be, at the end of the day, a very small part of some of the solutions as well.”