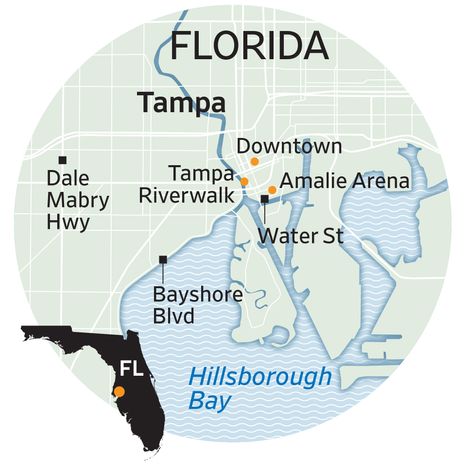 Bryan Pascual loves his hometown of Tampa, Fla., visiting often from his current home in Puerto Rico. But the 41-year-old entrepreneur is the first to admit that for much of his life, Tampa was “an A-minus, if you will, or even a B-plus” city with a nondescript downtown and a down-market reputation.

The Gulf Coast city has sparkling bays and white sand beaches within easy reach, but it didn’t have the five-star hotels, buzzy restaurants and hip downtown districts so crucial to a city’s cool factor. For many, Tampa was best known as the birthplace of Hooters—spawned in neighboring Clearwater—and as the backdrop for “Magic Mike,” the 2012 male-stripper movie shot in and around Tampa Bay’s tatty nightclubs and sports lounges.

But lately, something has shifted. “I haven’t been getting it as much as I used to,” says Mr. Pascual, referring to the Florida Man jokes he has endured. “People are coming to Tampa more frequently for conventions or to catch a Tom Brady game. Now it’s like, ‘Hey, I’ve been in your hometown, and it was great—amazing restaurants, good-looking people, looks like a lot of fun!’ ”

Mr. Brady, the celebrity quarterback who led the Tampa Bay Buccaneers to a Super Bowl victory in 2021, may have given the city a boost. But Tampa’s transformation has been driven by real-estate developers, who are reshaping its urban landscape as an open-air, live-work-play-ground.

Water Street Tampa, a $3.5 billion-plus planned district, on a 56-acre stretch of waterfront that had been mostly parking lots, is wrapping up its first phase of construction in the shadow of Amalie Arena, home of the Tampa Bay Lightning hockey team. The Strategic Property Partners development is a joint venture between the Lightning’s owner, Jeff Vinik, and Bill Gates’s Cascade Investment.

Four miles to the west, Midtown Tampa, a new 22-acre, mixed-use, multiphase development by the Bromley Companies, has revitalized a drab section of Dale Mabry Highway. The first phase, completed in 2021 at a cost of $500 million, has created a lively enclave with a mix of apartments, offices, coffee shops and ice cream parlors, along with dog parks, a 3-acre lake and a grassy commons where people gather for Trivia Nights, live music and free yoga sessions.

Meanwhile, designer-brand condominium towers are sprouting across Tampa faster than the bay’s native swamp lilies. Virage Bayshore, a 24-story high-rise, with 71 apartments priced from $1 million to $5 million, sold out before it opened in 2020.

Farther north on Bayshore Boulevard, overlooking Hillsborough Bay, the first tower of the two-tower Ritz-Carlton Residences, Tampa is under construction. An 11,000-square-foot penthouse went into contract for $11.6 million in October. Although it won’t be completed until 2024, the first tower’s 89 condominiums, with a starting price of $1.65 million, and 12 townhouse-style villas have sold out. Sales of condos at the second tower have begun.

Closings also have begun at The Residences at the Tampa Edition, on Water Street, a boutique hotel with 37 condominiums priced between $2 million and $8 million—all sold.

More luxury condos are in the pipeline. In May, Kolter Urban filed construction plans for One Tampa, a 56-story tower with 5,000-square feet of ground-floor retail space, 311 condominiums and a two-floor amenity deck that will break ground in 2023. Prices haven’t been announced.

Pendry Tampa, a hotel with 207 private residences from $1 million to over $11 million, will open on the Tampa Riverwalk in 2025. There have been more than $100 million in sales to date, according to a representative for Montage International, Pendry’s parent company.

No one has kept a closer eye on Tampa’s accelerating luxury market than Mr. Pascual. A fan of the Edition boutique hotel chain, he paid $2 million for a two-bedroom apartment on the Tampa Edition’s 15th floor in 2020, while it was still on the drawing board. “I needed to get my hands on one,” he said. “I was the first person to buy pretty much in the entire building.”

In late June, he and his designer went for a final walk-through of the newly completed condo, which has views of the city skyline, the waterfront and the Amalie Arena. He hopes to have it ready by September. “All the furniture is going to be customized, from Italy,” he said.

Mr. Pascual will have to wait a little longer to plan the décor of his second Tampa home: a three-story, three-bedroom villa with bay views, its own elevator and a terrace with a private plunge pool at the Ritz-Carlton Residences that he bought for a little over $2 million in 2021. He said he has no intention of flipping either luxury-brand residence.

More: Aspen’s ‘Motherlode’ Is a Luxury Rental in the Heart of the Tony Colorado Town

“It’s perfect for when I come into town to watch Buccaneers and Lightning games, and visit my parents,” he said. “I can see myself going back and forth between the two, having that more homestyle vibe at the Ritz and then spending the weekend at Edition, smack dab in the middle of the city.”

The appetite for high-price homes in the Tampa metro area, which includes Clearwater and St. Petersburg, sharpened during the pandemic, according to data compiled by Realtor.com. News Corp, owner of The Wall Street Journal, also operates Realtor.com under license from the National Association of Realtors.

“It’s still a bargain,” said John Paul Perez, president of Related Group, the developer of the Ritz-Carlton Residences, who says similar properties in Miami are double the price. “You can buy the same product in Tampa on the water for $1,000 a foot.”

Many of the people buying and renting homes in the new developments are from the greater Tampa Bay area. The pandemic, which caused some people to flee high-density urban areas for the suburbs, left others craving a more cosmopolitan experience.

“The pandemic was very isolating. It actually gave me comfort to be in a mixed-use community,” said Bridgette Simmonds, a 43-year-old life and leadership coach who moved in June into a two-bedroom apartment at Novel, a new luxury rental building in the Midtown Tampa development.

Her new community is a far cry from the Tampa she first got to know in the late 1990s as an undergraduate at the University of South Florida. “The way I would describe it is, ‘It’s got a great airport I can use to go elsewhere,’ ” she said.

Ms. Simmonds spotted Novel Midtown under construction while stopped at a traffic light. “It seemed like what was being developed in midtown was going to be so much fun—like cities like New York, where you can walk out of your apartment and go out to eat,” she said. “I lived only a mile up the street at another luxury complex, but I felt pulled to this place.”

Novel’s 390 rental apartments—priced from $1,918 to $5,500—sit atop a sprawling retail space that includes Whole Foods and Shake Shack. A private courtyard frames a saltwater pool and fountains; a two-story club for residents has co-working spaces and an expansive outdoor lounge. The building is entirely leased.

Ms. Simmonds, who pays about $2,800 a month for her fourth-floor apartment, sometimes meets with clients on Novel’s terrace or books one of its offices, decorated in vibrant colors with views of midtown. She goes to spin classes at a cycle studio on the ground floor, meets up with friends for drinks at a nearby rooftop restaurant, and buys microgreens, artisanal breads and fresh butter at the farmers market held twice a month on Midtown Tampa’s grassy commons.

Water Street has three distinct residential buildings with a total of nearly 1,300 apartments for lease and some of the highest rents in Tampa. Heron, the first to open, in March 2021, has 420 units across two towers, each with its own pool deck, cabanas, outdoor kitchen and fitness center. The apartments, from $2,613 to $6,427 a month, are 95% leased, a representative for Strategic Property Partners, Water Street’s developer, said.

More: The Warmth of Wood Taken to New Heights

Asher, the newest of the three residential complexes, opened in April and is 41% leased. Rents range from $2,070 to $4,985. Although Asher’s 490 apartments are smaller than Heron’s, its amenity footprint is extra wide, taking up most of the seventh floor. Outside, there is a sprawling pool deck complete with fire pit, and an artificial lawn with barbecue grills and an outdoor bar. Indoors, residents have a sleek co-working space with private conference rooms, clubby gathering spots and a media lounge, as well as a fitness center.

“All of the elements we had programmed to be about lifestyle and wellness and connectivity were our savior,” said Lee Schaffler, chief portfolio officer at Strategic Property Partners. “People are willing to live in a dense urban core as long as these other elements are there.”

There is, however, one element you won’t find on Water Street, he said. “There won’t be a Hooters.”