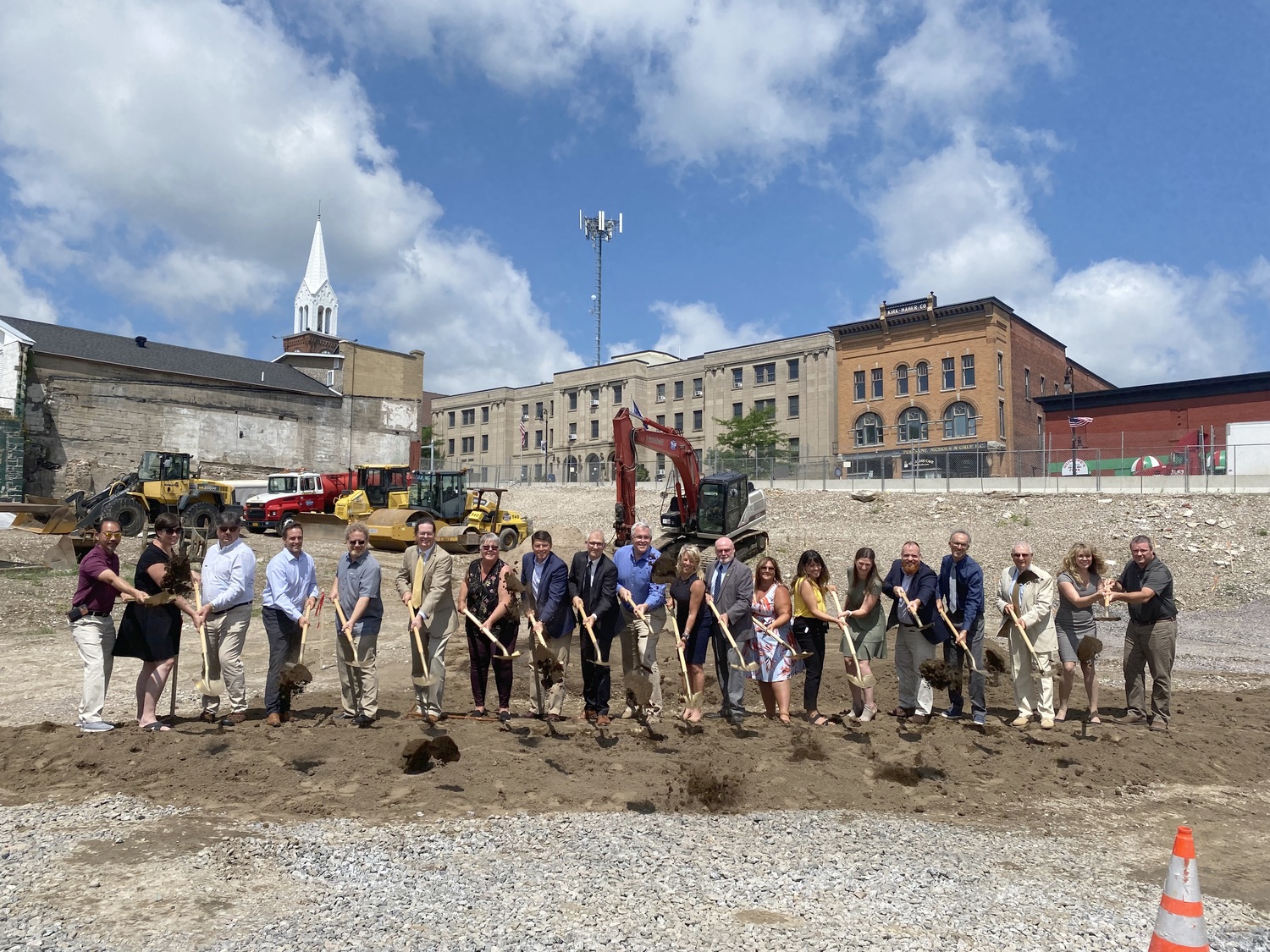 Local politicians and representatives of community organizations officially broke ground Tuesday on a new development that will bring 40 affordable housing units to downtown Malone. Twenty of the new units will be set aside for people who need supportive housing services, including those who’ve experienced issues like addiction, housing insecurity, and homelessness.

Citizen Advocates, a non-profit organization, will be providing services including career support, tenant education, mental health services, and addiction prevention, treatment, and recovery services. The new building is set to open in winter 2023.

In July 2017, a fire broke out in an historic building on Malone’s Main Street. One tenant was killed, and seven of the oldest buildings in the village were damaged. Afterwards, no one was allowed to live in them. Franklin County already had an affordable housing shortage, and losing access to those buildings did not help.

Now, the damaged structures have been demolished, and a new construction will replace the old buildings. Most of the $22 million needed to build the new development, which will be called Harison Place, is coming from the New York state government. Citizen Advocates is also providing $4 million dollars. (Citizen Advocates and 3d Development Group are the project’s co-developers.)

On Tuesday,  organizers held a groundbreaking at the construction site. Citizen Advocates president James Button gave a welcome speech under a green and white tent. “The vision to replace blighted property with affordable housing and the investment in this vision sends a strong signal to individuals and organizations that our downtown communities can once again be thriving economic drivers,” Button said.

State Senator Dan Stec spoke about the demand for affordable places to live. “It is going to be a new cornerstone serving so many people providing much-needed affordable housing, one of the top things that comes up anytime I travel my district,” Stec said.

Several downtown Malone residents attended the groundbreaking. Chris Hastings lives around the corner from where the new development will be. He brought his mental health service dog, Butch, to the ceremony. 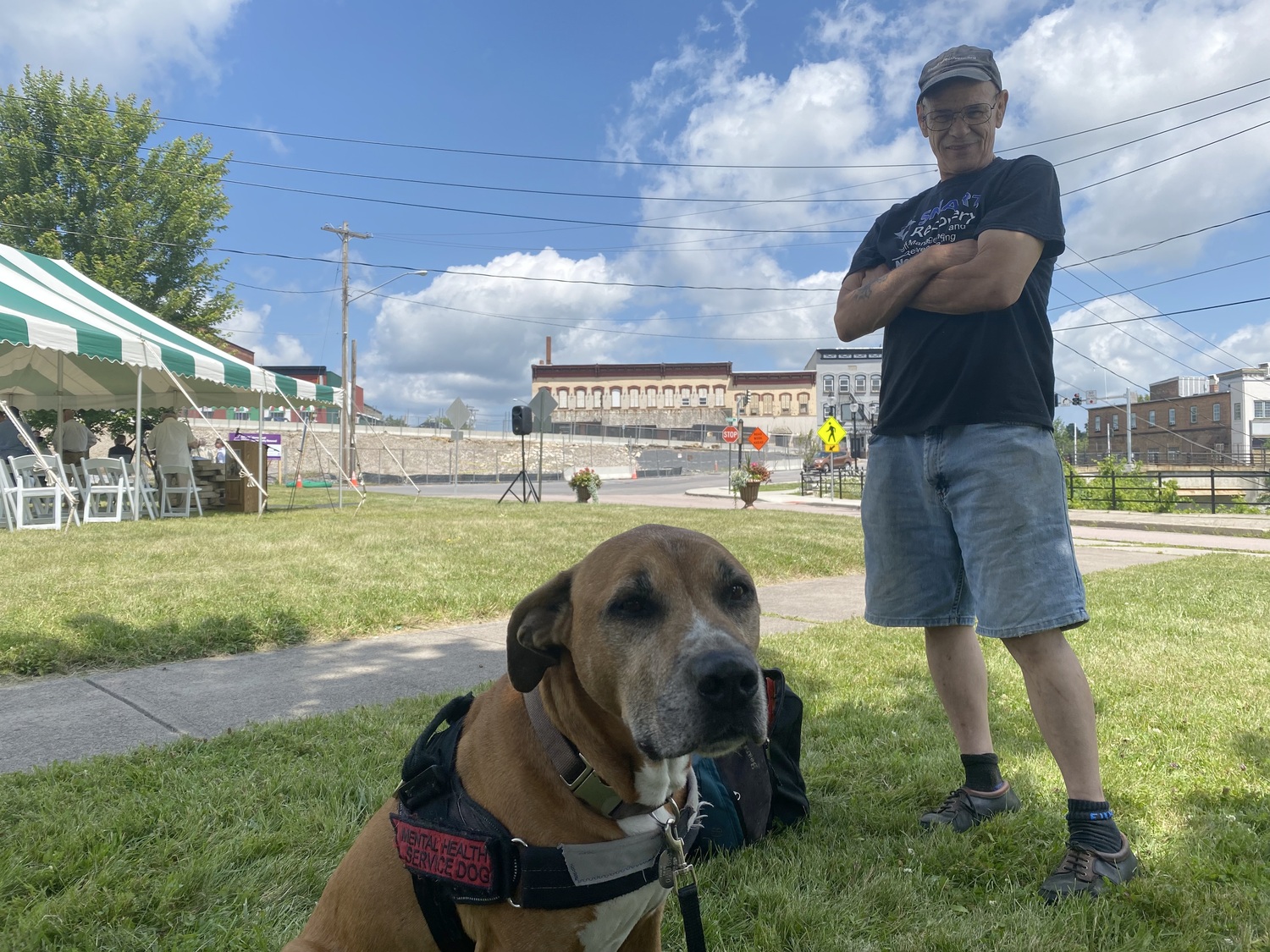 Butch helps Hastings handle his PTSD and anxiety. Hastings is a facilitator with SMART Recovery, an organization that helps people recovering from addiction. He says he knows plenty of people in Malone who need affordable housing.

“There’s a need everywhere, but especially in this area, because homelessness is starting to creep up on all of us because of people not having an affordable place to live,” Hastings said. “This is one of the poorest counties in the state.”

Standing in the sun before the speeches start, Hastings squinted his eyes and looked around.

“What I see this event as, it’s something transforming our community into a home for folks, instead of a waystation,” he said.

Another Malone resident, John Porta, said he’s been searching for an affordable single-bedroom apartment since after his wife died in 2018, but hasn’t had any luck. Still, he said, all his friends are in Malone, and he doesn’t want to move away from them. He’s hoping to move into the new building once it’s completed, he said.

“I figure it’ll be maybe among the best housing here,” Porta said. “It’s been touch-and-go, and I kinda just want to move on now.”

Button, the Citizen Advocates president, said Franklin County will decide who gets to live in the 20 apartments designated for those who need supportive housing services through a “single point of access process.” The other 20 apartments will be administered by local Housing and Urban Development and Section 8 authorities, he said.

Across a parking lot from the lawn where the speeches had been given, June Lysaught sat on her front steps. She said she would like to move into the new building, too.

“The rent is so high. And they keep raising it. I can’t afford them raising mine anymore,” Lysaught said.

Lysaught said she agreed with the event’s speakers about the need for more affordable housing in Malone, but she added that 40 units will not meet be enough to fix the problem. “It’s a start, yes, but it’s gonna take more,” Lysaught said.