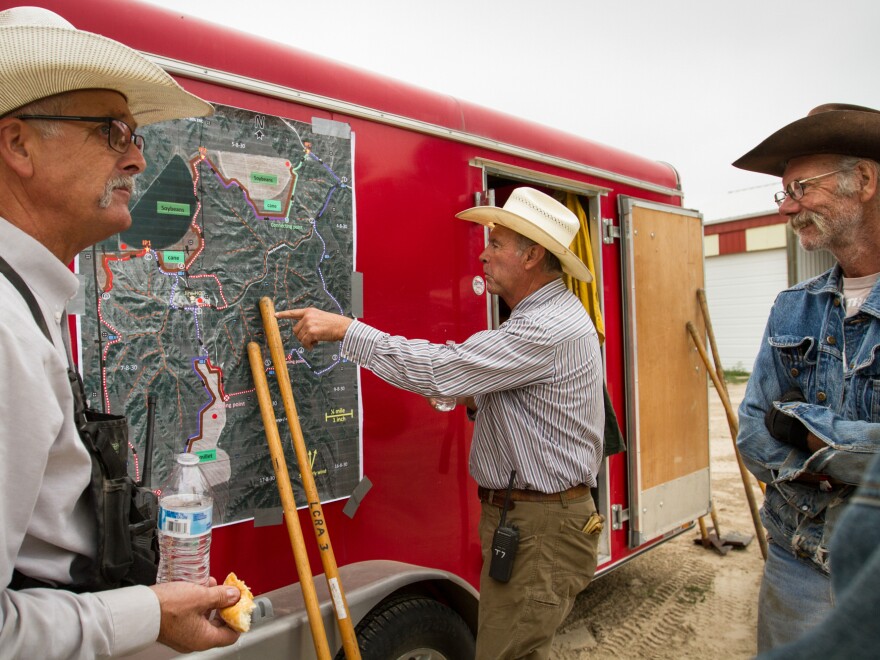 On a weekday morning in south-central Nebraska, friends and neighbors assemble around a bright red cargo trailer parked in front of a white farmhouse with a wraparound porch. Flatbed farm trucks loaded with water tanks and mud-spattered four-wheelers are parked nearby, while shovels and rakes placed against the trailer stand upright at the ready. People have come to set fire to this ground in what’s called a prescribed burn and reclaim acres from invading trees swallowing up the grassland.

The landowners who gathered this morning are pooling their knowledge, equipment and resources to conduct a planned fire on private lands. Weather conditions need to be safe: no high winds or overly dry terrain. Local authorities have to sign off. State regulations guide the process. During the burn, an experienced leader directs a trained crew, which, today includes corn farmers, cattle ranchers, a horse breeder, a retired border control agent, wildlife biologists and prescribed fire coordinators. They share a common belief:

Fire is not always bad; trees are not always good. By working together, the grasslands can be restored.

The prairie is in peril. Woody plant encroachment — the conversion of open plains to woodlands — is one of the most serious threats to grasslands worldwide. In the Great Plains region of North America, which had once been a sea of grass that stretched from Southern Texas north to the Canadian border, the primary invader is eastern red cedar.

The conversion of grasslands to woodlands has shrunk valuable grazing acres and diminished precious ground bird and pollinator habitat. And it has contributed to a staggering increase in wildfires.

Over the past 30 years, land burned by large wildfires in the Great Plains has quadrupled.​​ A warmer and drier climate creates conditions for larger wildfires.

And the woody vegetation that’s spreading is more conducive to extreme wildfire behavior. Fire is more difficult to suppress in woody vegetation, and trees magnify the probability of long-distance spot fires from flying embers.

“Fire is an important and natural process in grassland ecosystems. Fires burned through the Great Plains for thousands of years before European settlement,” says Victoria Donovan, a postdoctoral researcher at the University of Nebraska-Lincoln. “We can coexist with fire by embracing controlled burns to manage grassland landscapes.”

At the Loess Canyon Rangeland Alliance (LCRA) prescribed burn this particular morning, rancher Scott Stout is Burn Boss. Stout has been burning with LCRA for 15 years, and he directs the team like a seasoned coach calling out the next play. Stout first confirms that the group is aware of the perimeter lines and the locations of water tanks set out around the property. Then, he details how the burn will unfold.

This land has not seen fire in more than a century. The adjacent hillsides and canyons are knotted with eastern red cedar trees, which have created invasive, impermeable “living” walls. Without fire, a few spindly tree saplings in a grassland pasture will grow into a mature forest with low-hanging branches that obstruct livestock, deter wildlife and attract predators that endanger ground bird populations.

At Stout’s command, the team of ATV-riding volunteers, equipped with leather gloves and drip torches, thunders off to take their positions and begin restoring this grassland with fire.

Prescribed fire is a vital land management tool. According to the National Interagency Fire Center, federal and state agencies use prescribed fire to treat over 6 million acres annually. The Hermits Peak fire, currently burning in northern New Mexico, started as a prescribed burn set by a U.S. Forest Service crew. Unexpected erratic winds caused the fire to jump outside the project boundary, which land managers fear could foster a backlash against controlled burns.

The western United States is grappling with an abundance of built-up vegetation due to a lack of wildland fire over the past century. That vegetation becomes the fuel for the huge fires that have raged across the West in recent years. Controlled burns are necessary to maintain ecosystem health. By reducing fuels, these low-intensity prescribed fires also help mitigate extreme wildfire.

In the mid-’90s, John Weir, an Oklahoma State University extension specialist for prescribed fire, frequently conducted controlled burns at the OSU Research Range. Neighbors repeatedly reached out, requesting help to burn their properties. Weir had an epiphany. He didn’t need to go and burn for these people, he just needed to educate them on how to burn.

“The only way you’re ever going to get fire on the ground is through the landowners, especially in states with a lot of private land,” Weir says. “This is landowner helping landowner. Agencies are important; they help provide technical assistance. But it’s all about grassroots. Landowners can burn safely and effectively because they’re out there managing their own land.”

The Great Plains Fire Science Exchange tracks the locations of burn associations. There are currently 113 Prescribed Burn Associations (PBAs) in 18 states. Oklahoma, Kansas, Georgia and Florida are the states that burn the most prescribed fire acreage. Weir estimates that private landowners in Oklahoma and Kansas alone burn more than 4 million acres each year.

The Loess Canyon Rangeland Alliance is one of more than a dozen PBAs in Nebraska. To date, the nearly 80 rancher and farmer members in the Alliance have helped each other reclaim nearly 90,000 acres of Nebraska grassland; fire treatments also increased regional grassland bird richness by 65%.

While PBAs grew their roots in the Great Plains, land managers across the United States are taking notice of how this local, collaborative model can scale-up “good fire” in their own backyard.

In 2018, Lenya Quinn-Davidson, a fire expert with the University of California Cooperative Extension, helped found the first community-led burn organization in California: the Humboldt County PBA. Quinn-Davidson and her colleagues recognized the need to apply more prescribed fire in their state, so they coordinated a field visit to burn with a Nebraska PBA.

Can’t we just cut down the trees?

The magnitude of the eastern red cedar invasion into the grasslands is daunting. Cutting down the trees is not feasible — seed-bearing berries would remain and the invaders would continue to propagate. The cost of doing nothing regarding woody encroachment increases every year.

Rancher Jim Jenkins raises cattle and sheep in the Nebraska Sandhills, a rolling landscape where grass stabilizes the largest sand dune formation in the Western Hemisphere. But even here, in the most intact temperate grassland in the world, trees are intruding.

“Many of us don’t think we have time to burn, but if I’ve got 300 acres that are under cedar, from a grazing standpoint, it’s just lost land. You can get rid of those cedars a lot cheaper than you can go out and buy grassland,” says Jenkins.

Last year, Jenkins worked with the USDA’s Natural Resources Conservation Service (NRCS) to draw up a burn plan. Along with the support of neighbors and the nonprofit group, Pheasants Forever, they conducted a high-mortality burn that killed over 90% of the cedar trees within the burn unit.

The perception of fire as dangerous — as well as fear of lawsuits, liability and a lack of burn-friendly regulations — are the most significant impediments to this work. But data indicate that landowner-led burn associations are a safe and effective model to overcome the three main limitations to burning: expertise, equipment and personnel.

“For years, people shied away from fire because of the perceived danger,” says Brian Teeter, a prescribed fire-coordinating wildlife biologist at Pheasants Forever and Quail Forever. “What we’ve been doing is education and outreach — why we burn, how to burn — to overcome those barriers and give [landowners] the resources they need. Our biggest goal is to develop a culture of fire across the state.”

Fire brings the prairie, and communities, back to life

Fire not only reverses woody plant encroachment, it also revitalizes bird and pollinator habitats. Prescribed fires clear out old vegetation and underbrush, which releases nutrients and permits sunlight to reach the soil and stimulate new wildflower growth, an essential nectar source for pollinators.

“We need to make every acre the best it can be,” says Berthelsen. “The more wildflower species you have in your mixture, the more pollinator species you’ll benefit. This area right out here on the native prairie is literally burnt every single year. And that’s because of the seed production value that comes from the species that are very much fire-loving.”

Berthelsen is also a burn boss with the Central Nebraska PBA, the oldest burn association in the state. Fire is an essential tool for him and his neighbors.

“This burn association has lots of camaraderie and people have developed great friendships. If you go and help on other burns, when you’re ready to burn, people are there to help you,” Berthelsen says.

Prescribed burn collaboratives range from formal to informal, but to work effectively, the PBA must have strong leadership. Restorative fire is local, boots-on-the-ground work. Burn collaboratives provide the sweat equity to care for the lands they know well. Regular burning also creates a buffer around homes and urban centers that is more defensible in the event of a wildfire.

“Until we started burning, there was a separation between neighbors,” Stout says. “[LCRA] brought landowners back together that had lost touch with each other.”

As one neighbor helps another, individual tracts of grassland are stitched back together, restoring regional habitat one prescribed fire at a time.

As today’s burn wraps up, Stout and his LCRA partners take one final lap around the unit and “mop up” any smoldering embers along the perimeter. The dark, smoking moonscape of fire-charred cedar trees signals a major success. In just a few short weeks, the first sprigs of fresh grass will return, now free to grow in open, sunbathed plains.

Reporting for this story was made possible by an award from the Institute for Journalism and Natural Resources.