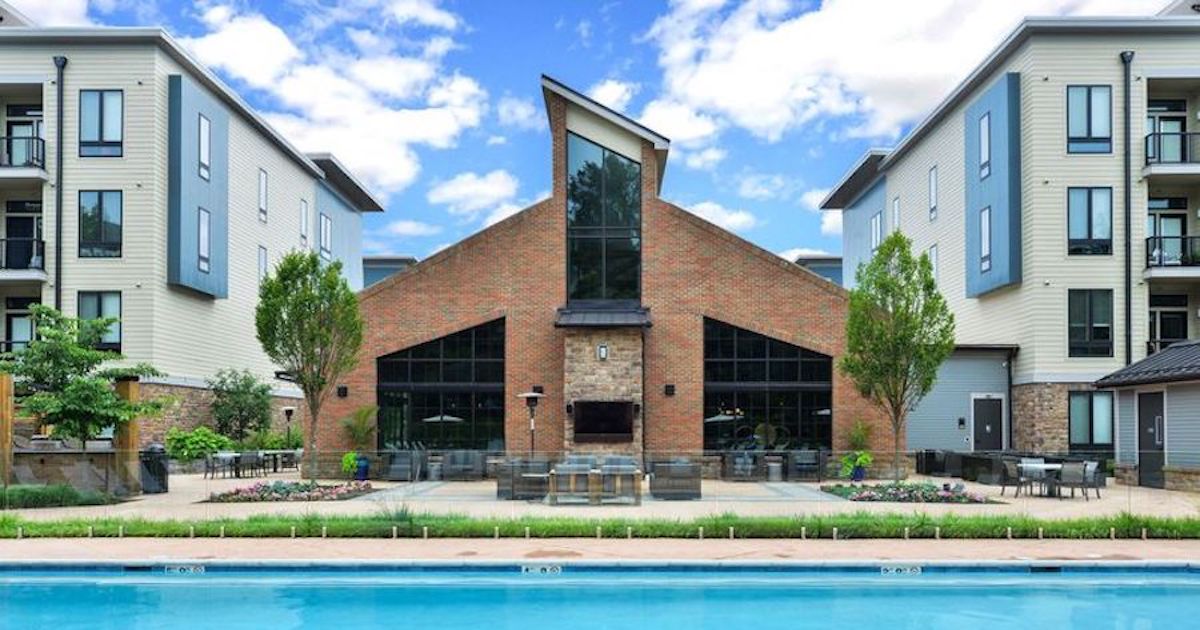 New apartments continue to come on line at a brisk clip all across the region. You’ll get the most bang for your buck renting in these five suburbs.

Sign up for our weekly home and property newsletter, featuring homes for sale, neighborhood happenings, and more. 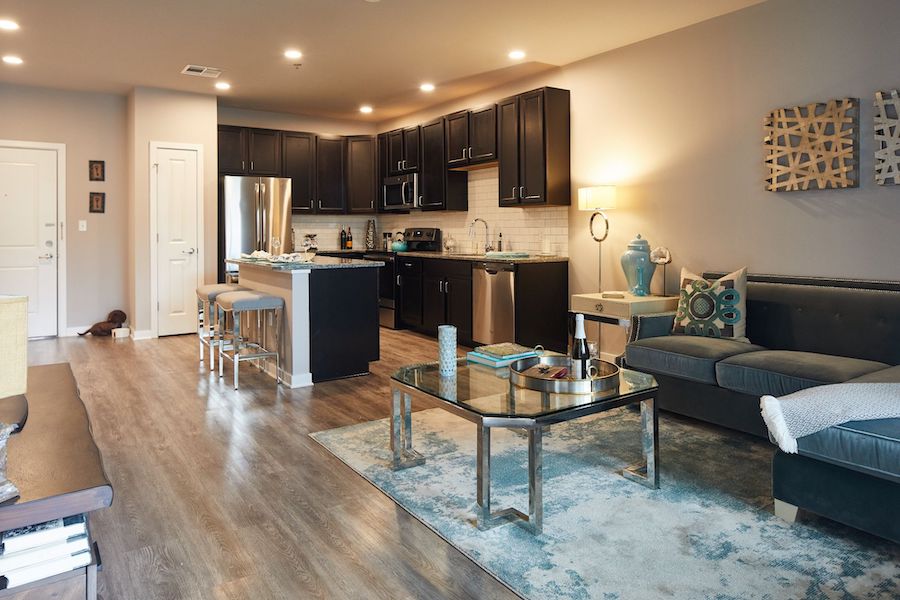 New apartment complexes have been sprouting like wildflowers in both city and suburbs these past few years. What you get in the city is convnenience; what you get in the suburbs, in many cases, is more room. The individual apartments in the complexes featured here — all of which opened within the last two years — don’t look that much different from this unit at the Station at Willow Grove, so the following photos will focus on the buildings, their common areas, and the amenities they offer their residents. | Photo: Petrucci Residential

March was also the month when the governors of all three states in the Philadelphia media market put their states on lockdown as COVID-19 cases rose. This drove the real estate market underground, but as those figures should show, people still needed to find apartments as well as houses.

You might think that the quickened pace of searches was the result of people seeking more space in suburban apartments in response to the pandemic. You would be wrong, says RENTCafé spokesperson Daniel Coste.

“While we are not excluding the influence of the COVID-19 pandemic on migration rates from urban to suburban areas, there is still no direct evidence to support its impact,” Coste says. Instead, the rise simply continues a trend underway even before the pandemic hit: People searching for larger apartments on the suburban fringe in general.

Why might renters be interested in apartments in the boonies? Some might simply want to be closer to suburban job centers. Others might want apartments with more greenery and outdoor amenities. Or they may actually be looking for places where they can socially distance more easily. In any case, these suburban apartment-hunters may well have a greater chance of getting more apartment for the buck. According to RENTCafé data, the average Philadelphia apartment rents for $1,652 per month, more than in any of the communities listed below for which figures are available. And the average Philadelphia apartment contains 808 square feet of space, and some suburbs have significantly larger apartments than that.

But which ones? RENTCafé looked at average apartment sizes in the Philadelphia Metropolitan Statistical Area (MSA) and identified the five communities in the region with the largest apartments on average. (Where the media market covers 18 counties in Delaware, New Jersey and Pennsylvania, including the Lehigh Valley, Trenton and Princeton, the Jersey Shore and Dover, Del., the MSA omits those other places; it covers only 10 counties in those three states plus one in Maryland.)

Two of those five wold be ideal places to look if you work in Wilmington: #1 Bear, Del., where apartments average 1,141 square feet in size, and #4 Elkton, Md., where they average 1,000 square feet. But if you still want to be closer to Philly, these places aren’t so ideal. So we asked RENTCafé to identify the five communities in the eight core counties of the Philadelphia MSA that had the biggest apartments on average. (RENTCafé, the country’s largest apartment rental search platform, gets its data from corporate sibling Yardi Matrix, a leading source of intelligence and data on commercial real estate, including multifamily housing. They did the same thing for the other 29 biggest U.S. metropolitan areas; the results appear on the RENTCafé blog.)

These locations vary in terms of community, culture, appearance and population, but are all within a one-hour drive of Center City. Ranked from the biggest apartments to the smallest, they are: 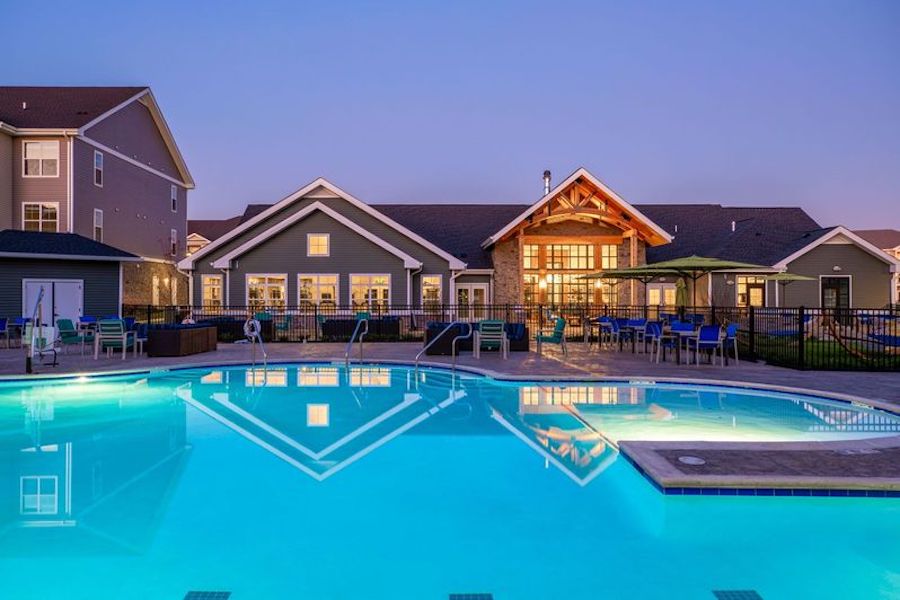 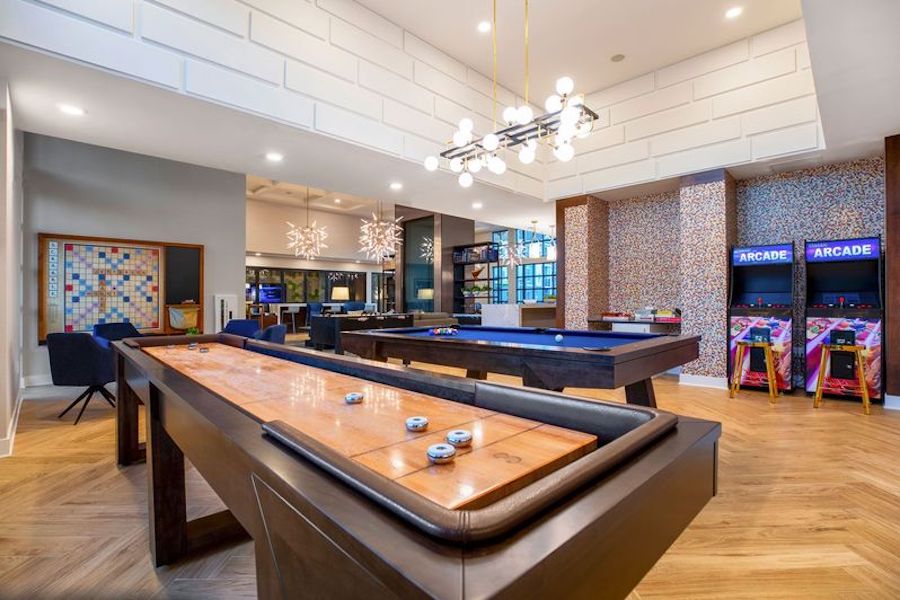 Jefferson Mount Laurel offers its residents a pool and clubhouse with a rustic look on the outside and a striking modern interior. Its resident lounge features a game room, a double-sided fireplace in its center and a bar. | Photos: Jefferson Apartment Group

On the other side of the Benjamin Franklin Bridge, you’ll find the New Jersey Turnpike’s original exit for Philadelphia in Mt. Laurel in Burlington County. What was once a rural farming community largely settled by free Blacks has grown since the 1960s into a suburb Money magazine ranked 16th in its 2020 list of the “50 Best Places to Live” in the country, one of two area communities to make that list. The transformation led the established residents to wage a court fight that has caused the township’s name to be forever associated with a landmark New Jersey Supreme Court ruling requiring every municipality in the state to provide affordable housing within its borders.

Like Bear for Delaware, Mt. Laurel is the only New Jersey location on our list. The area’s school district is highly rated and the area features several recreational complexes and two dog parks. 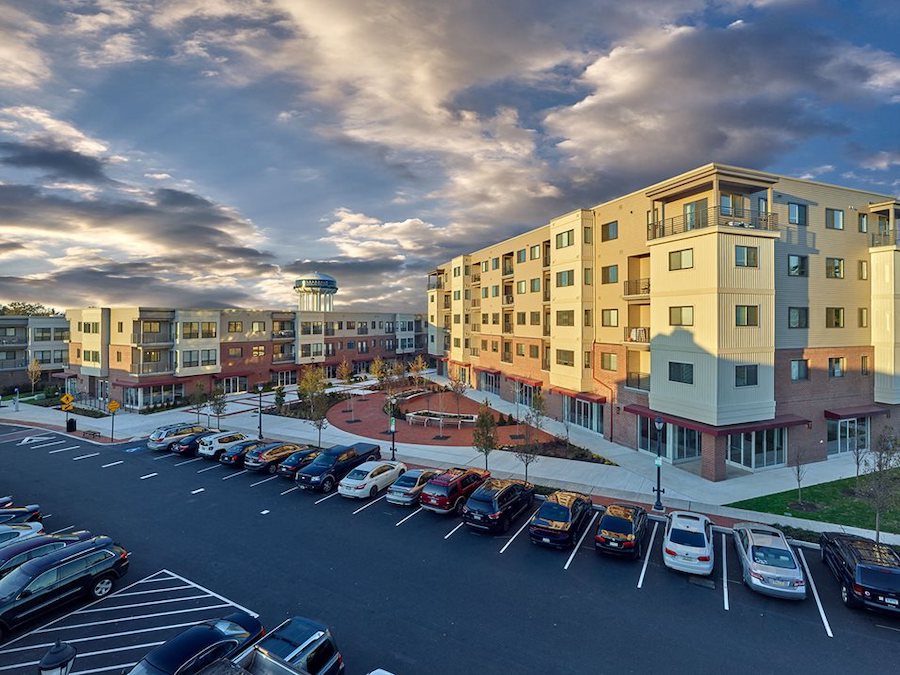 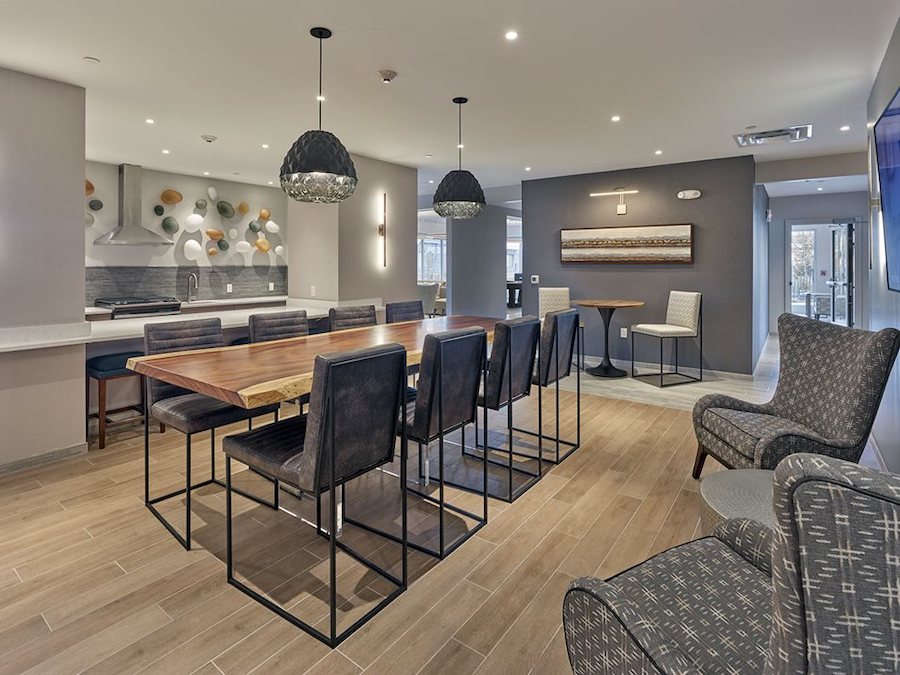 Madison Lansdale Station’s biggest amenity is its location right in the heart of downtown Lansdale, between its Regional Rail station and its main shopping street. The complex even has street-floor retail built into it. And it also has a full complement of resident amenities, including a fitness center, game room and café with a fully equipped demonstration kitchen. | Photos: Madison Apartment Group

Located north of the city in upper Montgomery County, Lansdale is a compact borough with a small-city vibe. Its status as the terminus for every other train on the Lansdale/Doylestown Regional Rail line makes it easy to commute to and from the city. Lansdale’s resurgent town center is home to The Underground, a relatively new entertainment venue that hosts everything from original music and comedy performances to board game and yoga nights to drag nights, all featuring craft brews from its across-the-street owner, Round Guys Brewing Co. 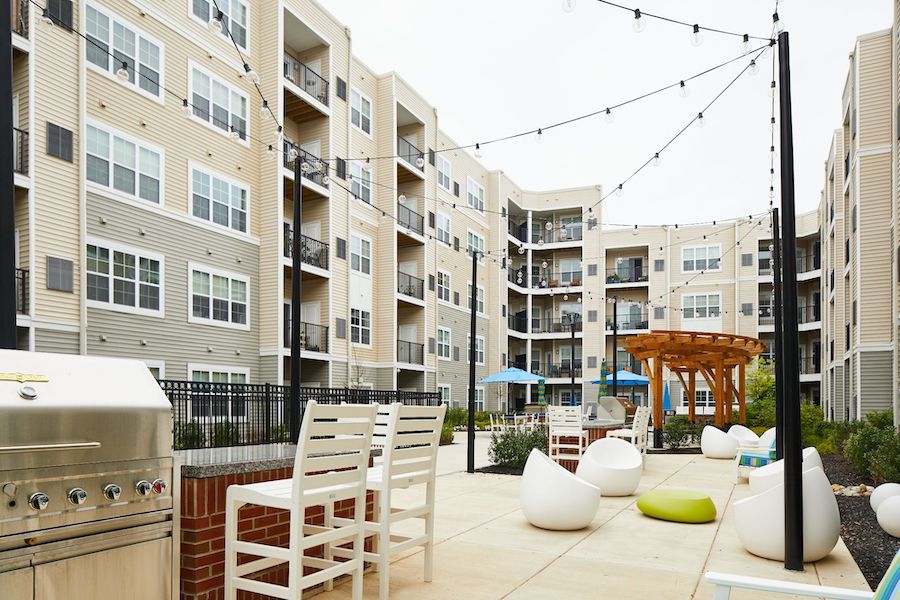 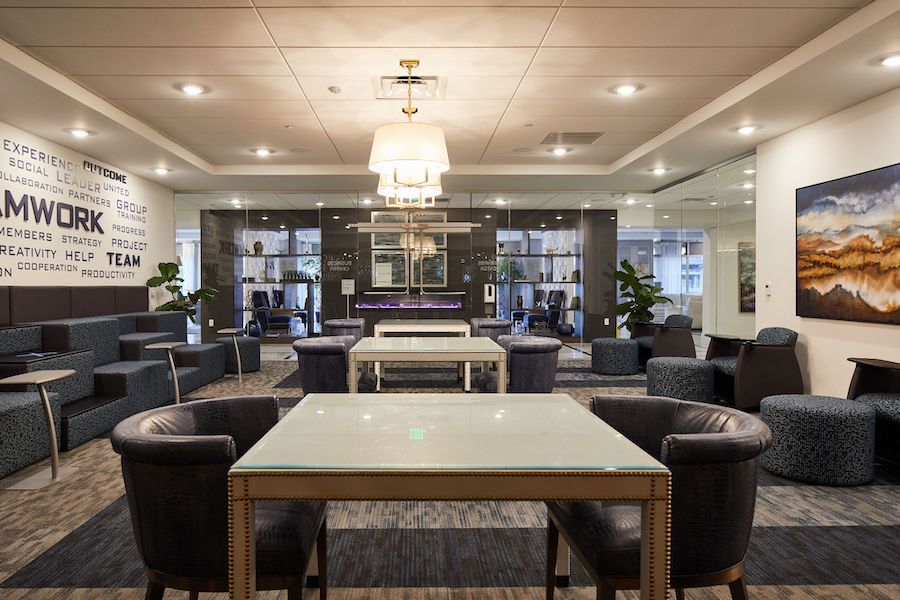 Like its counterpart in Lansdale, the Station at Willow Grove is located just steps from the community’s Regional Rail station. You can also walk to shops along Old York and Easton roads and the Willow Grove Park mall from here. The common areas, like the co-working lounge seen here, combine elements of midcentury modern design with updated traditional furnishings. | Photos: Petrucci Residential

Also in the northern ’burbs, Willow Grove covers parts of three Montgomery County townships. The suburb is loaded with nature trails and parks. It’s also home to the Willow Grove Park mall, one of the region’s largest, opened in 1982 on the site of a beloved amusement park dating to the 1890s. With its neighbor Horsham, once home to the Willow Grove Naval Air Station, Willow Grove is also one of the area’s larger edge cities, which means that your commute to work might be shorter than 40 minutes if you find work in the area. 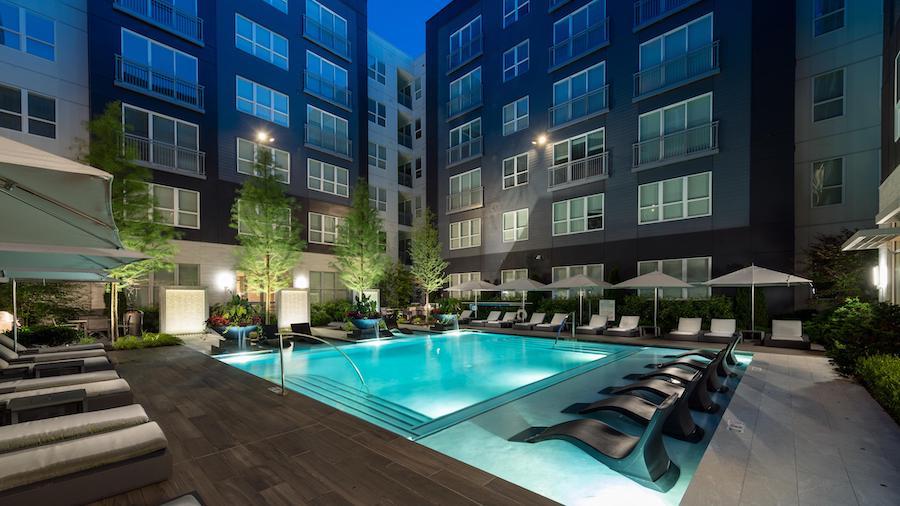 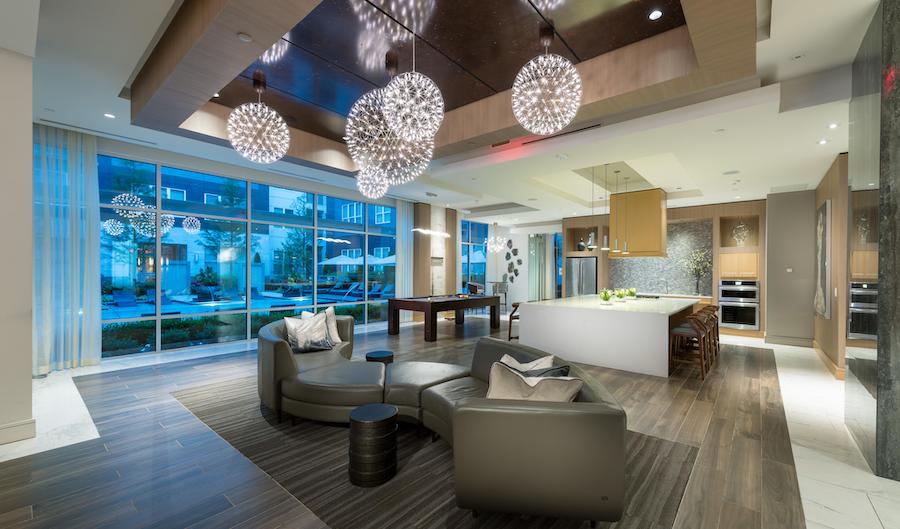 Hanover King of Prussia is one of two apartment complexes the Houston-based developer of residential communities has built at the Village at Valley Forge/King of Prussia Town Center, an Instant Urbanist live/work/shop/play complex near the King of Prussia business park. It’s strikingly modern and very well outfitted: you will probably want to throw your dinner parties in its super-snazzy demonstration kitchen and dining area instead of your own. | Photos: Hanover Company

Located where the Pennsylvania Turnpike and the Schuylkill Expressway meet, King of Prussia — often called “KOP” for short — is the Philadelphia area’s biggest edge city and home to the country’s largest shopping mall (for now), the place where Main Liners — and almost everyone else, for that matter — go for ultra-luxe shopping. Chances are that if you’re looking for apartments there, the commute to Philadelphia won’t matter, for it’s second only to Center City as an employment hub. It also is home to the Valley Forge Casino Resort, Valley Forge National Historical Park, and Gulph Mills Golf Club. 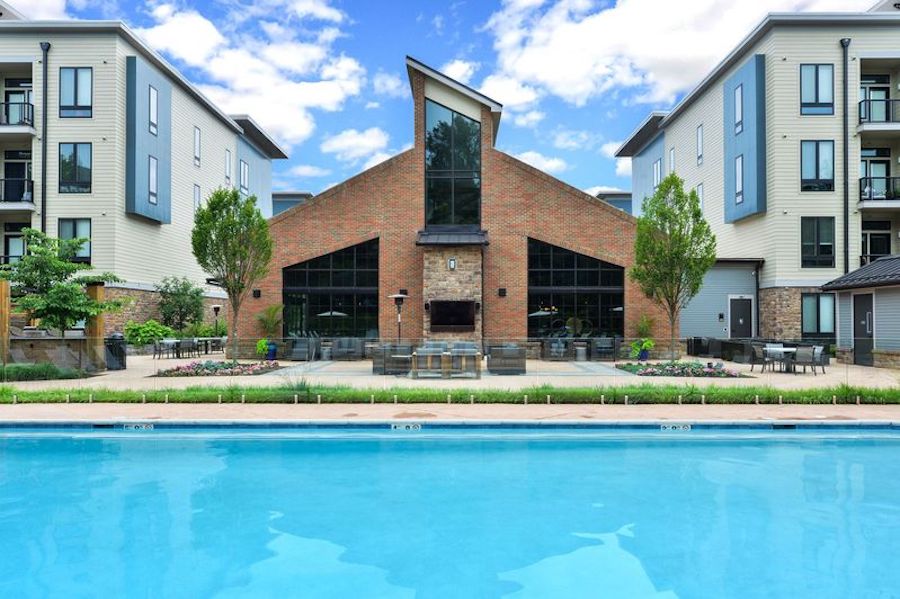 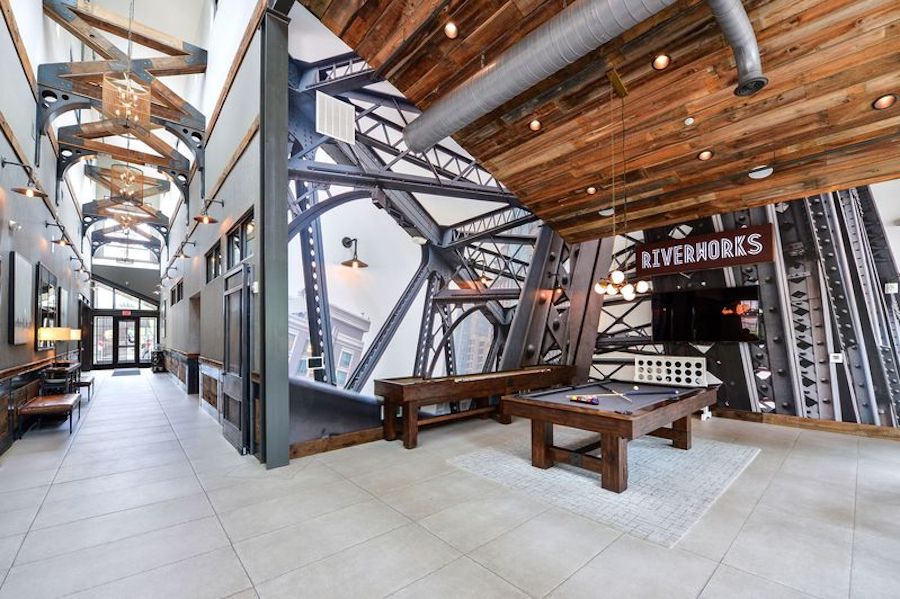 The Point at Phoenixville – Riverworks occupies a piece of the former Phoenix Steel plant site just across French Creek from the action on Bridge Street; a pedestrian bridge leads directly to Bridge Street from the complex. Its clubhouse pays clear homage to the site’s industrial heritage both in its exterior design and its interior decor. | Photos: Panco Management

The Chester County borough of Phoenixville is a reinvented steel mill town situated where the Schuylkill River and French Creek meet. With more craft breweries and brewpubs per square foot than anywhere else in the country and the 10th-highest number of craft breweries per 5,000 people within a five-mile radius, it’s the Mecca of suds in a region that loves its beer. It’s also close to Valley Forge National Historical Park as well as the Perkiomen and Schuylkill trails. The Colonial Theatre, right in the middle of all that beer, is the linchpin of a performing arts center that runs programs and performances year-round; in July, it’s the focal point of a weekend-long festival focused on the 1957 horror classic “The Blob,” which was filmed at the theater and in the area.

Bria Dinkins researched and contributed to this report. Updated Oct. 20th, 1:29 p.m., to add a link to the full study.